*This work is supported by the European Research Council (ERC) under the European Union’s Horizon 2020 research and innovation programme (ERC-Advanced grant NECTAR, grant agreement No 884715).

Neutron-induced reaction cross sections on radioactive nuclei are essential to our understanding of nuclear astrophysics and also of interest for industrial applications such as the transmutation of nuclear waste products. The ERC-funded NECTAR project aims to determine these cross sections indirectly using novel detection techniques at storage ring facilities.

The NECTAR team at CENBG

Heavy nuclei in the iron to uranium regions are created through processes such as the s- or slow neutron capture and the r- or rapid neutron capture. The latter, which occurs at high neutron densities, is a pathway to highly exotic nuclei through rapid and successive neutron captures, followed by β decays, which may terminate in certain cases in fission reactions.  Fission recycling can then occur where the two fission fragments continue to undergo neutron captures and β decays until fission again terminates the r-process path. After a few cycles the elemental abundances can be dominated by the fission-fragment distributions. The knowledge of the neutron-induced reaction cross sections for fission, neutron radiative capture and neutron inelastic scattering for these heavy neutron-rich nuclei is key to our understanding of the astrophysical scenarios that are responsible for the r-process abundance distribution in the solar system.

Apart from their great interest in nuclear astrophysics, the cross sections for neutron-induced reactions also provide valuable information for applications in nuclear technology such as the transmutation of nuclear waste, one of the key problems in nuclear energy to be tackled in this century. 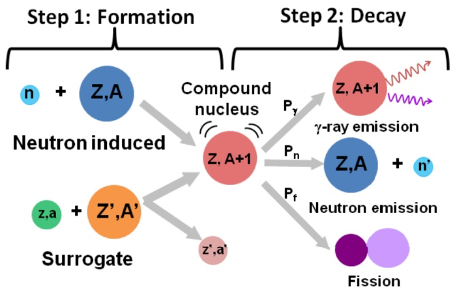 Fig. 1: The sequence of a neutron-induced reaction. First a compound nucleus is formed, which then de-excites by the emission of  γ -rays, a neutron or by fission. The probability P associated with each decay channel is indicated. In a surrogate reaction, the same compound nucleus as in the neutron-induced reaction is produced by a different reaction.

To investigate such heavy neutron-rich nuclei, it is not practical to merely bombard them with neutrons in direct kinematics. They are short-lived and typically highly radioactive, which makes safe handling untenable. Additionally, any detection system would be overwhelmed by gamma-ray and particle background, thus rendering neutron capture cross sections impossible to measure in practice. Theoretical predictions of these cross sections can be wrong by several orders of magnitude due to the lack of knowledge on model parameters such as fission barriers, level-densities and γ-ray strength functions, which rule the de-excitation process of the compound nucleus produced after neutron capture.

NECTAR (NuclEar reaCTions At storage Rings) aims to circumvent these problems by using the surrogate reaction method in inverse kinematics. The heavy nucleus is to be put in the beam to bombard a light nucleus in order to produce the compound nucleus that is formed in the neutron-induced reaction of interest by an alternative or surrogate reaction, as illustrated in Fig. 1. Typical surrogate reactions include transfer and inelastic scattering. As illustrated in Step 2 of Fig. 1, the compound nucleus may decay by γ-ray emission, neutron emission or fission. The probabilities as a function of the compound-nucleus excitation energy for these decay modes, which can be measured with the surrogate reaction, are particularly useful to constrain model parameters and to inform more accurate predictions of neutron-induced reaction cross sections.

These experiments are to be performed with the heavy-ion storage rings at GSI/FAIR in Germany. This presents an ideal opportunity for the development of the surrogate reaction method, which is still hindered by unresolved target-related issues. The storage rings at GSI/FAIR provide a high-quality beam which when used in conjunction with an ultra-thin gas-jet target will enable for measurements of excitation energy and decay probabilities with unrivalled accuracies. The simultaneous measurement of fission, neutron and γ-ray emission probabilities will be a first at the GSI/FAIR facility. However, the ultra-high vacuum (UHV) conditions inside the storage rings pose severe constraints to in-ring detection systems.

The objective of NECTAR is to develop a set-up and a methodology to simultaneously measure fission, γ- and neutron-emission probabilities induced by transfer and inelastic scattering reactions in inverse kinematics at the CRYRING storage ring of the GSI/FAIR facility in Darmstadt, Germany.

The required set-up is shown in the upper part of Fig. 2. It consists of: a detector to identify and measure the kinetic energies and angles of the target-like nuclei. A fission detector covering forward angles to detect fission fragments in coincidence with target-like nuclei. A detector for measuring the number of beam-like products formed after g-ray or neutron emission detected in coincidence with target-like nuclei. The detector for beam-like residues is placed after the second dipole magnet downstream from the target. The dipoles will separate the beam and the beam-like residues according to their magnetic rigidity.

The fission detector has to be placed in UHV. This is very challenging and we propose a completely new solution, which is to build this detector with solar cells.

The first experiment will be performed with a 238U beam on a deuterium gas jet target to investigate the reactions 238U(d,p), 238U(d,d‘) and 238U(d,t). This experiment will constitute the final validation of the experimental setup and method. Subsequent experiments will investigate neutron-induced capture cross sections via the surrogate reaction method in multiple unstable heavy nuclei. 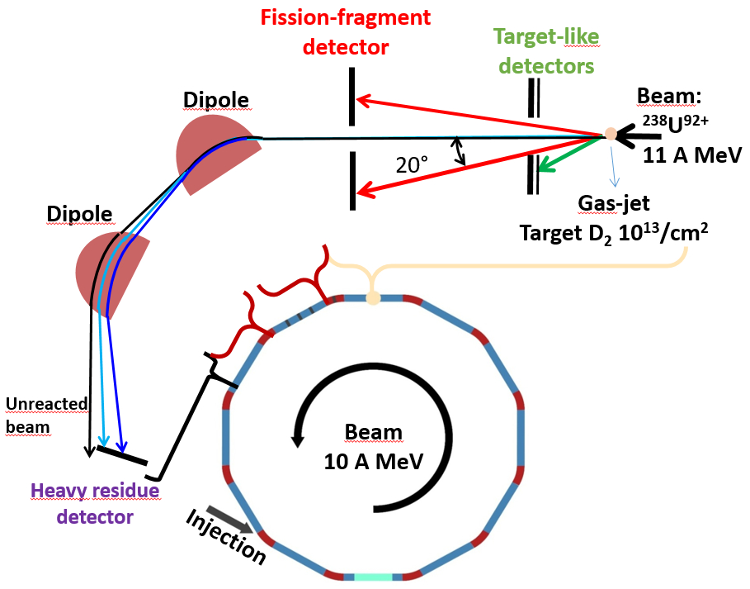 Fig. 2: Diagram of the future NECTAR setup at the CRYRING storage ring facility at GSI indicating the positions of the target residue, fission fragment and heavy residue detectors.

Solar cells, the devices that are routinely used to convert sunlight into electricity, have been shown to have good energy and time resolution when used for detecting heavy ions with energies of about 1 A MeV. In addition, they are extremely cost effective and much more resistant to radiation damage than the traditionally-used silicon detectors. Their radiation hardness will be of critical importance in the ultra-high vacuum (UHV) environment of the storage rings at GSI. Under these conditions, breaking the vacuum for detector troubleshooting during the beam period could cause a fatal loss of time for data taking, since reestablishing UHV, even in a small portion of the ring, can take several days or even weeks.

To use solar cells in our measurements, it is necessary to investigate their response to heavy ions at energies above 1 AMeV and their UHV compatibility.

Measurements were performed at the GANIL in Caen in March 2021 with an 84Kr beam at energies of 5, 10, 15 AMeV on Si and Ge solar cells with dimensions varying from 10×10 mm2 to 30×30 mm2. With these tests we could investigate the evolution of the solar cell response with beam energy and also perform long radiation resistance tests. Preliminary analysis of these data indicates a non-linear response in the amplitude of the energy output signal at the highest beam energies, which is presently under further investigation. These measurements also afforded us with the possibility to test a new preamp developed at CENBG specifically for use with solar cell detectors as part of the NECTAR project. Finally, the radiation resistance tests demonstrated a superior performance of solar cells with respect to silicon detectors.

In parallel to the studies on the solar cells’ response, we have developed a test bench (TREVO) to investigate the ultra-high vacuum compatibility of the fission detector. This test bench should be operational in 2021.

In June 2022 we will perform a proof-of-principle (PoP) experiment at the ESR storage ring to investigate two of the key points of our measurements: (a) The excitation energy, resolution and systematic uncertainties. (b) The transmission and the separation of the beam-like residues.

This experiment will investigate the 208Pb(p,p’) reaction at an incident energy of 30 AMeV. We have chosen 208Pb because it is within the mass range of nuclei we are interested in and its ground state and first excited states are well separated in energy. The number of events, mean values and the widths of the peaks corresponding to the ground and excited states of 208Pb in the measured E* spectrum will allow us to detect possible systematic uncertainties and determine the achieved E* resolution.  The measurement of the position and the number of detected beam-like residues will allow us to benchmark the simulations describing the trajectories of the heavy residues within the ring. These simulations require a precise knowledge of the ring parameters. In addition, by measuring target residues with a detector telescope, situated inside a pocket, capable of measuring scattered protons at high energies (up to 40 MeV) in coincidence with beam residues using DSSD detectors situated downstream after a dipole magnet as indicated in Fig. 3, we will be able to determine both neutron and gamma emission probabilities, thus providing a first validation of the experimental method of NECTAR. 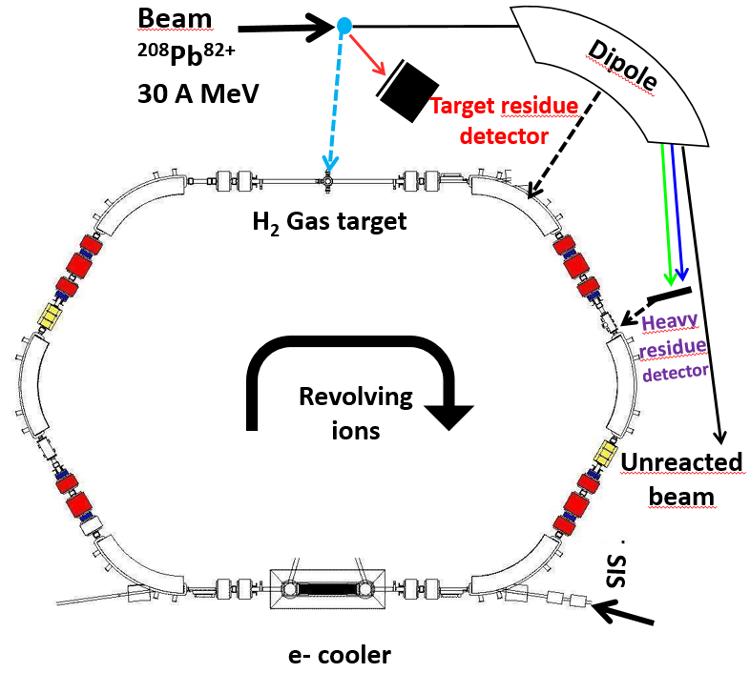 Fig. 3: Diagram of the ESR storage ring facility at GSI indicating the positions of the light- and heavy residue detectors which will be employed for the PoP experiment. 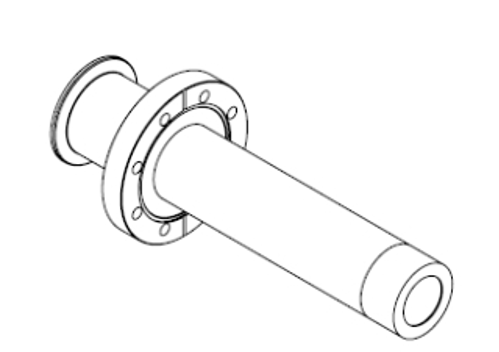 Fig. 4: Diagram of the telescope detector pocket, including a 25-micron window in the bottom-right and a flange for connection to the electronics. 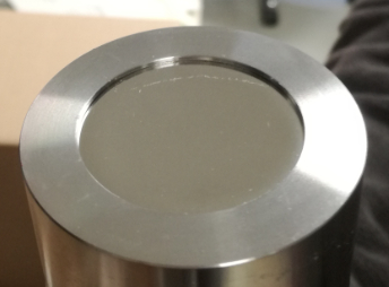 Presently our main collaborators are: